Become a member of IVON

Note: When you sign up to become a member you will have to type some text into a box to verify that you are actually a human.

We respect privacy and will do everything we can to keep your information, other than what you make public, completely private. We do not sell or share anyone's information.

As a site member you will receive IVON's e-Newsletter.

We Need Your Help!

IVON-Independent Voters of Nevada needs volunteers to make phone calls, to collect signatures and help grow our organization. If you are interested, or know someone who may be interested, please send contact information by e-mail to [email protected].     Thank you!

Information about the President

IVON's meetings are also listed under Events where a map of the meeting location is provided.

If you need more information and/or to RSVP, please e-mail Catana L Barnes at [email protected]

Independents Are Not Moderates

By Sarah Lyons, the Director of Communications for IndependentVoting.org, a national association of independent voters and activists.

Take our survey for Independent voters.

Sign up here for the National Conference Call for Independents  --Every six weeks, CUIP president Jacqueline Salit hosts America's largest ongoing national call for independents. She provides updates about what independents are doing around the country and how the movement is growing. Get connected, hear updates.

The next conference call:

Where Do We "Grow" From Here?

A National Conference Call for Independents

Please join independents from around the country for a national conference call:

Register for the call here: https://docs.google.com/spreadsheet/viewform?formkey=dEFsVld6TkpuQTVTWjV2a3poNXVDYlE6MA

From the Conference of Independents Saturday, February 12, 2011 at the Skirball Center for the Performing Arts in New York City 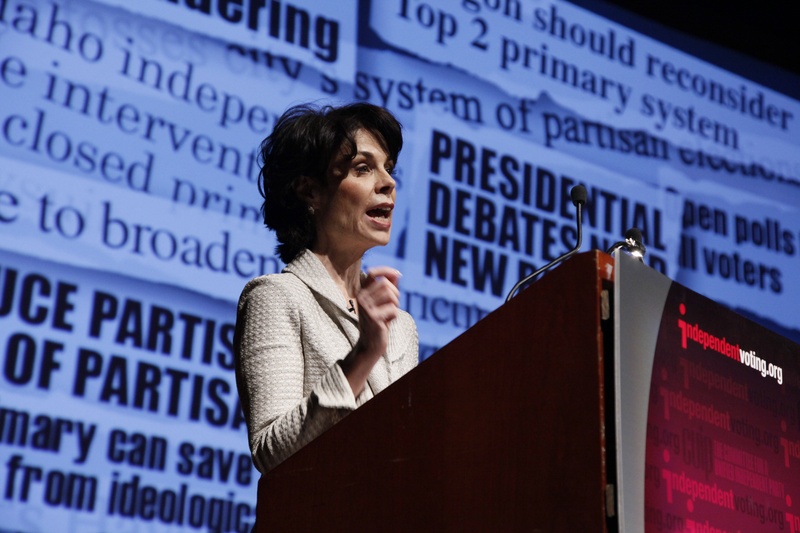 Read about the conference, view pictures and buy a copy of the DVD here...

"Never doubt that a small group of thoughtful, committed citizens can change the world. Indeed, it is the only thing that ever has." -Margaret Mead

Politics for the People is designed to take you behind the scenes for a look at politics and history from an independent’s point of view.

Our Book Club will read and discuss books of interest to independents. We're now 40% of Americans.

The Next Book Club Selection

This is a good book for understanding the historical aspect of partisan politics.

I highly recommend this book to everyone! This was an exceptional read.  Catana Barnes, President of IVON

As our country’s politicians engage in bitter partisan battles, focused on protecting their own jobs but not on doing the nation’s business, and political pundits shout louder and shriller to improve their ratings, it’s no wonder that Americans have little faith in their government. But is America as divided as the politicians and talking heads would have us believe? Do half of Americans stand on the right and the other half on the left with a no-man’s-land between them?

Hardly. Forty percent of all American voters are Independents who occupy the ample political and ideological space in the center. These Americans are anything but divided, and they’re being ignored. These Independents make up the largest voting bloc in the nation and have determined the outcome of every election since World War II. Every year their numbers grow, as does the unconscionable disconnect between them and the officials who are supposed to represent them.

The Swing Vote: The Untapped Power of Independents tells the story of how our polarized political system is not only misrepresenting America but failing it. Linda Killian looks beyond the polls and the headlines and talks with the frustrated citizens who are raising the alarm about the acute bi-polarity, special interest-influence, and gridlock in Congress, asking why Obama’s postpartisan presidency is anything but, and demanding realism, honest negotiation, and a sense of responsibility from their elected officials.

Killian paints a vivid portrait of the swing voters around the country and presents a new model that reveals who they are and what they want from their government and elected officials. She also offers a way forward, including solutions for fixing our broken political system. This is not only a timely shot across the bows of both parties but an impassioned call to Independents to bring America back into balance.

Copy of a letter to President Obama about independent voters and our current two-party, partisan, political system.

I am an independent voter who is politically active in my community, and concerned with the divisiveness of our current political system. Through my political activism, I have had the opportunity to discuss multiple issues with people, and every single voter I have spoken with does not believe that any voter should ever be excluded from any part of the political process. Unfortunately, that is exactly what our current two-party system does, and that is why we believe that the two-party political system no longer has a place in our 21st Century Republic. Instead, we believe it is time to move our country forward by embracing non-partisanship and opening up the entire political process to include independents. We believe that the well-being of our nation depends on unity rather than divisiveness, and doing away with partisan politics and ideologies will help make that unity possible.

Write your own letter to President Obama about your thoughts on the current state of our political system.